Perhaps the most enduring image I have of the great Bangkok flood of 2011 is an encounter our film crew had with a 93-year-old woman during the height of the catastrophe. Our team had travelled just north of Bangkok to one of the hardest hit areas of the flood. We were accompanying a relief team from Thai television Channel 3, and it was late in the afternoon.

All day long the volunteers had brought in supplies of fresh food and water to people trapped in their submerged homes. But as we neared the end of this day’s operation, an aged woman all alone paddled up to our motorboat. She was in an old Thai wooden boat, dressed colourfully in purple and blue and wearing a traditional large brimmed Thai hat to ward off the searing sun. After more than a month of floodwater covering her home and the homes of others, she still had the vigour and strength to contend with the crisis. 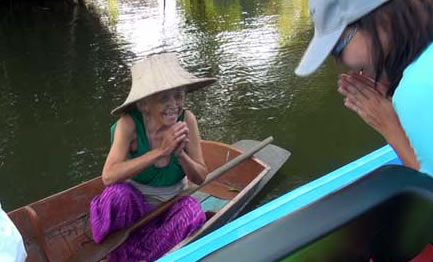 The 93-year-old woman in her boat.

At that moment, I realised she symbolised everything that was good about the Thai people who were living with this catastrophe. Her spirit unbroken, she had endured and come to terms with the hardship of the conditions she faced. And because of her age, I also realised that her life spanned two of the greatest calamities ever to hit Thailand: these floods of 2011 and the equally massive flooding of 1942, when she would not yet have been twenty years old. Age had not only brought this woman wisdom but strength and the knowledge of how to survive great tragedy.

Thailand is a country of exotic splendour. Its dense forests, thriving jungles, dazzling temples, and mysterious ruins and palaces vie with its modern resorts, beachfronts, and shopping centres as a magnet for tourists from across the globe. This is the Thailand I know and love. It’s the country I now call home, a place where sudden catastrophes such as tornadoes, hail storms, and even earthquakes are almost unknown. 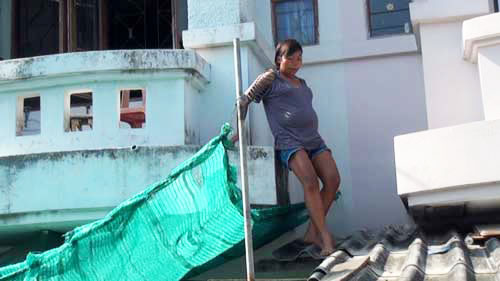 A pregnant woman walking across roof in order to reach food.

Even the Indian Ocean Tsunami of 2004, while it killed many more than this flood has, did not match the widespread property loss caused by this year’s flood. Over two million people were directly affected. An area the third of the size of Texas went under water. Businesses disappeared. Jobs were lost. Lives destroyed. The suicide rate has increased dramatically. For several months, hundreds of thousands of people either lived in homes where the water forced them to survive on their second floors or they had to take refuge in sparsely outfitted evacuation centres. Some just had to build makeshift camps to survive. Too often, their only company was a stray crocodile, a cobra seeking dry land, or a giant python forced out of its watery fields. 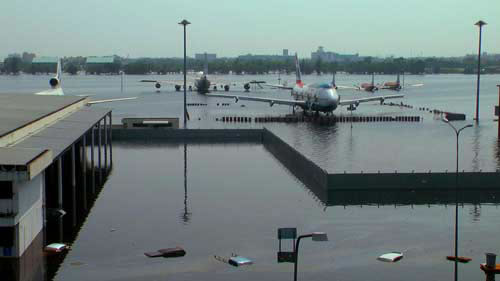 Due to the frenetic shooting schedules that had kept me travelling all across Asia, Thailand had become a short stop to repack and get fresh hard drives. It wasn’t until I was jetting home from the Eagle Festival in Western Mongolia that the enormity of these floods hit home. Thailand has a monsoon season and some flooding happens every year. But not like this. I sat in the comfort of first class on Thai Airways reading the Bangkok Post and looking at surreal pictures of the temples of Ayutthaya, the ancient capital of Thailand, now flooded with 3 metres or more of water. These irreplaceable treasures of the past are UNESCO World Heritage sites, and I had just shot them in 3D last year as part of a joint project between Mahidol University and UNESCO. Now the 3D video may be all that is left of these magnificent structures of the past.

I am used to scripted and documentary shooting, but now I was taking 3D into the news arena. But what better way to bring home the reality of this disaster than in 3D?

The first challenge was how to bring the 3D equipment down to a manageable amount. Weight and size would be an issue. The crew would be heading into many unknowns, crammed into relief vehicles, small boats and who knows what else. Even some of the smallest two-camera beam splitter rigs would be too big. And with the vibration from the motion of the vehicles and boat engines would yield useless 3D.

The only logical choice was the Panasonic AG-3DA1. It had to be kitted out with just the necessities. The RedRock Micro microMattebox to allow for the use of ND filters to combat the harsh glare off the water. The Convergent Design nanoFlash 3D was used to record at higher bit-rates. The VariZoom VZPFI one-handed controller for easy operator control. These were all absolute ‘must haves’.

In the hardest-to-reach areas, I needed a really simple 3D camera. The Sony HDR-TD10E camcorder offered compact size, point and shoot ease and close convergence capabilities, all with reasonable quality. 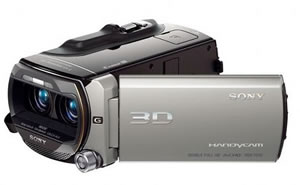 The crew consisted of myself, my wife, Sompao (Bee) Caudullo, fellow lecturer and renowned Thai cinematographer, Dorn Ratanathatsanee and Program Director of Mahidol University Fine and Applied Arts Entertainment Media Program, Dr Paul Cornelius. Paul himself was a victim of the flood and had to evacuate from his water-filled home by boat. 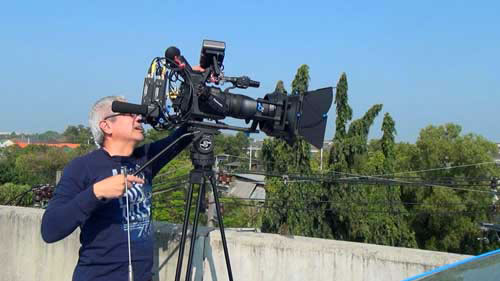 The limited response of the government, which was caught off guard, did not help matters much. Only when the Royal Thai Army and Royal Thai Navy stepped in did effective food relief begin to materialise. Otherwise, most help came from public-spirited corporations and Non-Governmental Organisations providing volunteers and relief work. 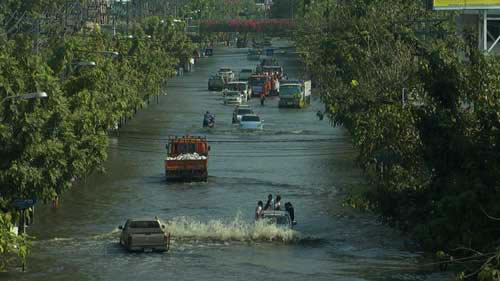 The people who did the most to help, however, were the victims of the flood themselves. I saw this with my own eyes as our camera crew spent hours getting to the edge of the flood zone. With water already knee-deep on the streets, only large trucks could get through. Villages and local officials organised things themselves, creating evacuation centres overnight, furnishing people with medical care, food, water, and most of all, hope. For example, when we got to an area called Lamlukka, we met a mayor, a school teacher and a nurse who worked around the clock every day for at least two months making sure everyone in their community survived. 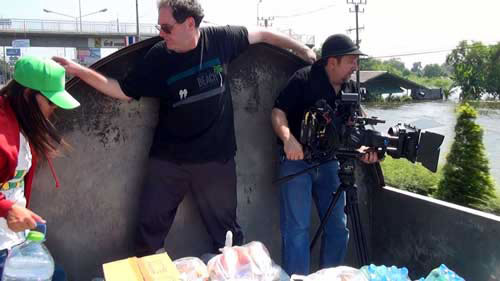 Me and Paul in the back of a converted garbage truck.

When our camera team finally did get into the heart of the flood zone, the picture was almost overwhelming. Streets everywhere had become canals. Rice fields had become lakes. And a vast area of Thailand’s interior had become a giant inland sea. But if you weren’t careful, if you looked at things from too great a distance, you might miss the devastation. In fact, from afar, things often appeared beautiful. I remember seeing a giant Buddha statue, its golden torso reflecting the sun and scattering its rays across a flooded field. But when you got up close, things changed. The shimmering waters turned black and gave off a foul, toxic odour. The streets-turned-canals quickly filled with garbage and waste run-off. And everywhere, people were just stuck. Without anything to do except wait for the waters to recede. 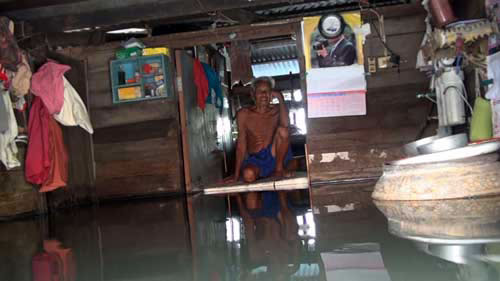 An elderly man stranded in his flooded home.

The need to edit quickly

With the shoot in the can, now the task of getting the edit done quickly became paramount. As a news story, a prolonged wait would reduce the impact and urgency of the story. My studio has been working with the new Grass Valley Edius 3D version. Since I had been beta testing the software for some time (the 3D Preview version has since been released to the public), I was confident that it was up for the task. The ease in which Edius combines the separate right and left video files from the Panasonic AG-3DA1 and the NanoFlash 3D into Stereoscopic pairs was simple and efficient. The Sony was even easier with the .mvc files able to be imported and recognised immediately as stereo-enabled.

One-click stereo adjustment, fine-tuning the colour balance for the right and left views and floating stereoscopic windows were accomplished all with effortless speed. With the technical details reduced to simple steps, the creative work of assembling the edit could move forward.

Only in the new year has Bangkok become almost entirely dry. Other areas of the country, such as the central provinces, still remain under water. Weather reports talk of even worse monsoons forecast for the next rainy season that is mere months away. A sense of dread still looms in the air.

This has been the biggest calamity I have ever witnessed directly. Even as I write, neighbours, friends, and millions of others are cleaning out their homes, tossing away ruined furnishings, scraping mould and the residue from contaminated water off their walls, fences, and pavement. Every young school child hopes against hope that they will not be like the 93-year-old woman in seeing two such catastrophes in one lifetime. 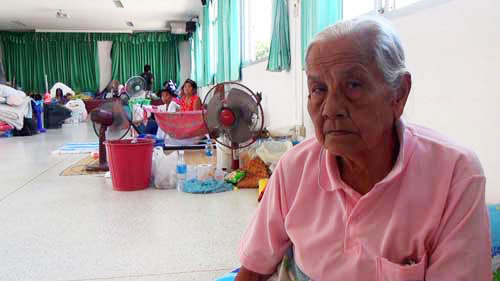 As a postscript to this story, Tom Coughlin of the Storage Vision Conference held in Las Vegas on January 8 & 9, just before the Consumer Electronics Show contacted me after seeing the first video. The storage industry players such as Western Digital, have factories in Thailand that produce 60% of the worlds’ hard drives. Tom was familiar with the flood situation and the hardships that it brought to the Thai people. He wanted to do something to help and he saw this 3D video as a way to immerse people in what was happening.

At the Vision Storage Conference there was a booth set up showing Faces of the Flood 3D to the attendees of both his conference and CES. Tom also donated US$1000 to aid the victims of the flood.

Special thanks to John Taylor, VP of Public Affairs and Communications for LG Electronics USA who graciously and without hesitation stepped forward to donate the use of an LG Cinema 3D TV and 3D glasses for the booth.

Al Caudullo is Chief Cook and Bottle Washer, 3D Evangelist, Producer, 3D Stereographer and Editor for 3DGuy Productions. Al has won the Association of Virtual Worlds award for 3D Excellence, and has used his thirty plus years of video production experience as a foundation for stereoscopic image capture. As principal of 3DGuy Productions, Al served as 3D Stereographer and 3D Editor many on projects including film, TV and corporate production. Clients include Panasonic, Hitachi, Imagimax Studios, 3DeeCentral, Polaroid, Spatial View, Toyota and many others.

Information about donating to help can be found at:
www.3dguy.tv/storage-visions-conference-supports-thailand-flood-relief