On December 8th 2012 we (VividEcho) held a 3D event in partnership with the BFI Future Film and BoldFace Productions called Visionaries:Youth in 3D. We were lucky to secure world class 3D experts for a panel discussion that followed the screening of TT3D. 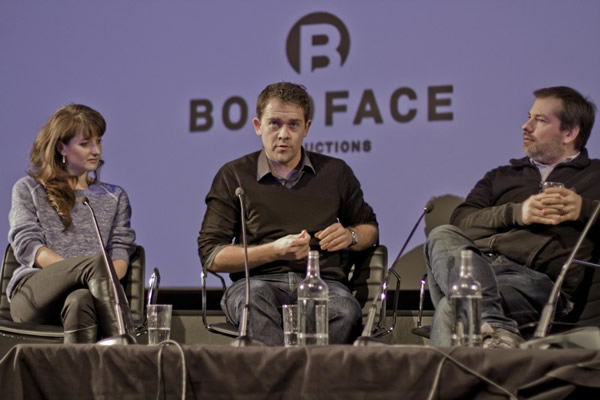 The panel from left to right: Jacquie Pepall, Adam May and Adam Sculthorp

The panellists were (in alphabetical order):

Adam May: Head of Production for Vision3 who have worked on Jack The Giant Slayer, BBC’s Mr Stink, Horrid Henry, Pirates of the Caribbean and Flying Monsters with David Attenborough. Adam is also current Co-Chair of the UK Committee of the International 3D Society.

Jacquie Pepall: freelance Writer, Director, Producer and founder of Great Lake Films. She has created content in 2D and 3D across a wide range of genres. In 2009, Jacquie managed the launch of Sky’s dedicated 3D channel, acting as a Producer, Director, and/or Production Consultant on over 15 hours of 3D programming. Credits include 3D Producer for David Attenborough’s natural history series, Kingdom of Plants 3D.

Adam Sculthorp: Creative Director and Senior Stereographer for Dimension Media which he launched in 2010. In 2009 Adam became closely involved with the development and subsequent launch of the Sky 3D channel in the UK. His recent credits include Ridley Scott’s latest feature film, Prometheus and stereoscopic consultant on Atlantic Production’s Kew 3D.

Transcripts from the panel discussion: