That’s a bold statement, but a true one. As the world’s premiere broadcast and professional solutions supplier, Grass Valley™ has over 3,000 active broadcast customers, and tens of thousands of professional users generating content using Grass Valley tools.

Our comprehensive portfolio spans a wide range of sophisticated solutions satisfying the needs of broadcasters, TV production facilities, and professional video users throughout the world. Our employees, R&D centers, manufacturing locations, and sales and services offices in every major country in the world all have one goal: providing best-in-breed products and services for content production and facility infrastructure.

While many companies are talking about stereoscopic 3D production, the return on investment associated with the dedicated 3D equipment and extra staff can be elusive. One way that production companies are navigating through the current situation is to identify equipment that can be used for both HD and 3D projects. It just makes sense, both from a financial and equipment utilization standpoint.

This multiformat capability also allows production professionals to make the transition from HD to 3D production that much smoother. If they’re familiar with a piece of equipment in HD, using it for 3D should be a natural step forward… and just as easy to use in 3D as in HD. 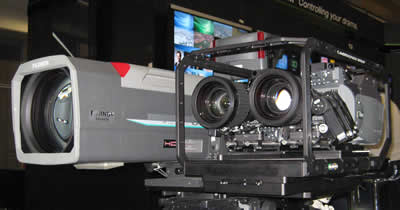 Several major productions, such as the recent French Open tennis tournament, were produced with Grass Valley HD equipment and have reaped the benefits of operational familiarity and cost savings due to the use of the same LDK 8000 Elite cameras, Kayenne Video Production Center switcher, and K2 Summit media servers. They even used the same crew they typically would use for an HD shoot.

Operators of the Kayenne can now approach live 3D production in the same way they would 2D HD projects using a feature called DoubleTake.

By splitting and linking M/E channels on the Kayenne, the left-eye and right-eye content is automatically switched in parallel, with all the resources of the Kayenne’s M/Es. Transition chaining functions can be used in combination with parallel video paths using features such as Key Chaining, Background Chaining, and Partition Sync to simplify 3D project configurations and set up.

On the camera side, when using Shadow 5D (2D + 3D) Rigs from Cameron Pace Group, it’s easy to incorporate both 2D and 3D into the same camera position and utilize one camera operator for both 2D and 3D. This reduces the equipment footprint and stadium seat kills by having one rig shoot both 2D and 3D. Standard LDK 8000 Elite cameras are used for both the 2D and 3D positions, eliminating the need to carry specialized cameras that may receive only limited use and monetization. Special software and hardware tie in all 3 cameras so they work together to provide optimal shots for both 2D and 3D simultaneously. When using standard 3D rigs with the LDK camera system we provide enhanced functionality and feature sets to make it fast and easy to get set and ready for your production.

Multi-use functionality is also a feature of Grass Valley Trinix NXT routers, Aurora™ and EDIUS editing software, and K2 Summit and K2 Solo™ servers. All of these products are 3D ready once you’re ready for 3D. 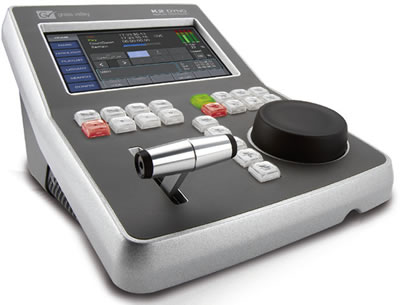 Thanks to new software capabilities with ChannelFlex™ and AppCenter Elite, Grass Valley has made it possible for all K2 Summit and K2 Solo servers to be expanded to handle 3D—even two channel servers.

Every K2 Summit and K2 Solo that Grass Valley has shipped to date is capable of supporting ChannelFlex, so, if you already own one, with a simple software upgrade, you can now configure it as a 3D record device or an expanded multichannel playout system, even a super slo-mo replay system when teamed with the Grass Valley K2 Dyno Replay Controller.

Making good-quality, live 3D programs is not easy, but with familiar tools it doesn’t have to be that hard… or that expensive.