Posting The Hobbit was an epic in itself, involving massive amounts of data and workflows which had never been done before.

“It’s Peter’s constant desire to push his story-telling forward that keeps us inspired down here.” That was how Tony Pratt, workflow architect at Park Road, summed up the long-term relationship with director Peter Jackson, a partnership that has developed to the point where he counts on the post house to find the latest technologies to deliver his vision.

Park Road, of course, has had a long association with Jackson, and together they had developed smooth workflows for handling stereo 3D. So even when additional technical challenges were thrown into the mix the team was confident the technical ducks were lining up and they could handle it.

The most talked about new technical challenge for The Hobbit was, of course, Jackson’s desire to work in high frame rate: 48 frames a second rather than 24.

The creative impetus for this was strong: it gives a freedom to move the camera quickly when needed. This is most noticeable in the big battle sequences, where the camera dives and swoops to track the action without judder and – for me at least – absolutely no eye strain. I was just immersed in the action, rather than feeling like I was looking at a screen.

Some purists complained about the HFR effect as not being “film-like”, but in a sense that was the point. The new technology exists to help tell stories better, and it should not be ignored just because it is different.

Twice as many frames means twice as much data. Double that again because of course the film is shot in stereoscopic 3D. Storage is a problem, but throughput is a bigger one. At the time, there was no way moving two streams of 48 frames a second in real time, let alone display them.

A second challenge was that Jackson was keen to retain all of the dynamic resolution produced by the Red Epic cameras so he wanted to keep the 16 bit raw data, giving the equivalent of 13.5 stops all the way in to the final grade. So the data architects had to find a way to capture, deliver to post, edit, grade and composite the 5k resolution, 16 bit per colour output, 48 frames a second output of the Red camera. Two cameras per rig. As many as 16 rigs on a big battle sequence. Sometimes as much as 12 terabytes a day. 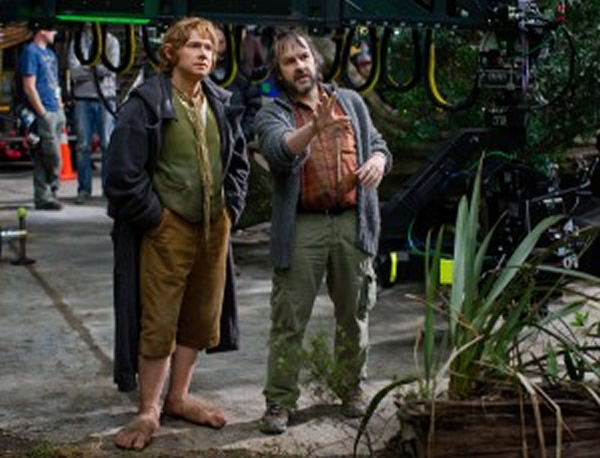 Martin Freeman and director Peter Jackson on the set of the fantasy adventure “The Hobbit: An Unexpected Journey,” a production of New Line Cinema and Metro-Goldwyn-Mayer Pictures (MGM), released by Warner Bros. Pictures and MGM. Photo by Todd Eyre

“When we knew that The Hobbit was coming along, and Peter was on board, we had a busy NAB,” recalled Phil Oatley, Park Road’s head of technology. This was April 2010, and they needed to find a solution that would be able to keep up with this massive data flow. Once principal shooting started there would be little chance to catch up, so the system had to work at full speed from day one.

“We were doing some aggressive testing with all the usual post suspects,” according to Oatley. “Then, on the last day, we saw the most compelling demonstration we had ever had from a manufacturer.”

The demonstration was with Spanish company SGO. Its Mistika finishing system was already well developed and had a strong if not huge following. By this time it was being seen as the best tool for finishing stereo 3D and it was this which attracted the Park Road team to look at it. But Oatley added “we were utterly astounded by the rate at which SGO develop their platform”.

Following the NAB conversation, SGO took a Mistika to Wellington, with product specialist Nicholas Recagno, for a week of intensive HFR 3D testing. “It worked pretty flawlessly, to be honest,” said Oatley. “During that week we more or less formed the bones of the workflow.”

That workflow starts on set, with some heavy-duty data wrangling. Park Road built trolleys they called “barbecues”, containing three Mac Pros, 64TB of storage, high end networking, and an LTO drive. This allowed the data team to perform the critical QC pass on the data in real time during ingest. Camera magazines were checked, transferred and returned as quickly as possible, with suspect magazines immediately quarantined for further investigation.

Left eye and right eye data went down separate paths, allowing for the all-time failsafe of one eye being regenerated from the other should data get corrupted. All data was mirrored on site and written to multiple LTO-5 backups.

One of the advantages of the small city of Wellington is that the studio is just a short distance from Park Road. The barbecues contained their own self-contained fibre and very fast networking. It meant that they could transparently attach to the Park Road network and directly transfer verified camera magazine data extremely quickly. On location the fibre was replaced by duplicate LTO-5 tapes hand carried by trusted production runners. 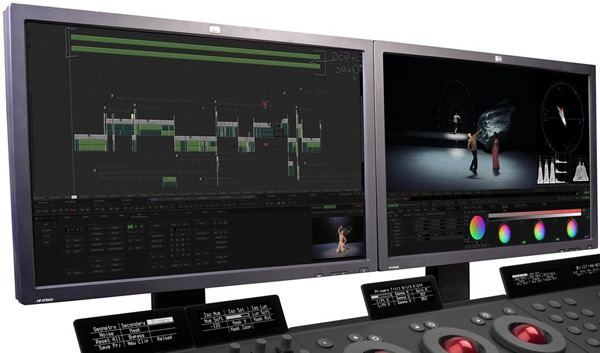 Once in Park Road’s asset management virtually every creative task was handled by SGO Mistikas. The Mistika is a sophisticated finishing system, based on clever software running on standard hardware. The typical Mistika configuration is an HP Z820 computer with an NVidia Quadro GPU. For The Hobbit, SGO worked with DVS on a 48fps video I/O board.

The first task was to derive an editorial version. This pass applied corrections to the 3D geometry where required, and a colour grade, to create an offline copy from the raw 5k data, as an Avid MXF. In general the editorial version was just the dominant eye in 2D, but where 3D was required it was delivered in side-by-side format to make it completely transparent to HD infrastructure. This allowed the offline editors to work on standard Avids using HD televisions as monitors, even if they needed to see 3D.

The workflow also produced single eye MXF and MOV files as dailies for those who did not have to judge stereo. For department heads and leads files were delivered to iPads for quick checks on set. “There were a lot of iPads out there,” Oatley recalled. “They were all super-secured, of course, but it was a great way to get selected dailies out to lead crew in every department.”

As well as the dailies, the asset management programme had to package files for Weta Digital, the sister company responsible for developing the visual effects. Like every other part of the workflow, tracking the metadata was critical. With the number of clips, effects layers and renders building by the thousands every day, knowing where everything was and the state of progress was critical.

“It is only when you get into the workflow that you realise some of the complications,” said SGO’s technical director Javier Moreno. “The offline created a 24fps EDL. When it came to conforming the online then all the live action and VFX were in 48fps, so you have to be able to support both frame rates on the timeline.”

“Park Road always builds in a huge degree of resilience, and redundancy, into our systems” says Oatley. “We ask at production meetings what sort of shooting ratio Peter is planning, then double it. And double it again. So we could stay in lock step with the shooting. Our infrastructure had just a little fat in it, so if for instance we needed to redeliver dailies for any reason we could do it without falling behind. In fact, because of the way we built the infrastructure, our turnaround for dailies was faster than most 2D features.”

With all the complications of high frame rate 3D, does this mean that the whole post production process becomes slower? According to SGO’s Moreno, not necessarily.

“We worked with Park Road to design a system that delivered realtime performance, even at 48fps in 3D,” he said. “Some traditional platforms find realtime performance demanding in 2D 24fps, and when you are working on 5k 3D HFR full dynamic range media there is nowhere to hide – you cannot cheat on an effect!”

During the design of the workflow, Park Road decided they wanted to investigate performing the final colour grade in Mistika, too. While Mistika had always had colour correction functionality, the SGO team took this as a driver to develop both more sophisticated control and a new user interface.

“We worked closely with Dave Hollingsworth [supervising colorist on The Hobbit] and his team at Park Road,’ Moreno explained. “An important part of what they said they needed was already on our roadmap, but they pushed us in the right direction. The new colour grading toolset inspired by The Hobbit is now part of our standard product.”

Deliverables were as much a challenge as any other part of the project. Nine different formats were required, covering 2D, 3D, 48fps, 24fps and film, with 5.1, 7.1 and Dolby Atmos soundtracks, and six different home entertainment formats. All versions were exported in a single pass from the master Mistika files, with all versions of each reel created in around an hour.

Quality control on each version was hugely rigorous, with different QC rooms looking at the left eye, the right eye and the stereo, on the grounds that three people will not blink at the same time. Signed off outputs were delivered by Aspera from Wellington to Los Angeles, as well as sending a physical backup hand carried by a member of the team.

“When we got involved in this project, it became clear just how complex it was going to be, with lots of departments involved and huge numbers of assets,” said Moreno. “There was no product in existence which could sit in the workflow spanning all these requirements.”

I asked the Park Road team about where the problems and panics lay in the project. “It was pretty boring for war stories,” admitted Oatley. “Nothing much went really wrong, thanks in no small part to SGO.

“We were seeking a relationship with a technology partner, and we found that SGO shares a philosophy with us,” he concluded. “What we demanded, and they delivered, was phenomenal.”

Dick Hobbs is a consultant, writer and commentator on broadcast technology and its application.