Amarjargal, a ten-year-old Mongolian boy, sits proudly atop his powerful horse and stares curiously at my camera like it was some kind of alien creature from another planet. Although there is a plethora of newly-released 3D cams flooding the marketplace, the presence of a 3D camera in any remote geographical area is indeed unique.

My WalleCam, as I affectionately call my Panasonic AG-3DA1, stares back steadfastly at the boy. The AG-3DA1 is the ideal indie/travel 3D camera for an efficient crew of two: my wife Bee and me. It allows me to work in delicate and intimate environments that would otherwise not be feasible with a big 3D camera rig and a large crew. Added to that is the Convergent Design, NanoFlash 3D external recorder for recording raw XDCAM at 180Mb/s in order to ensure broadcast quality. 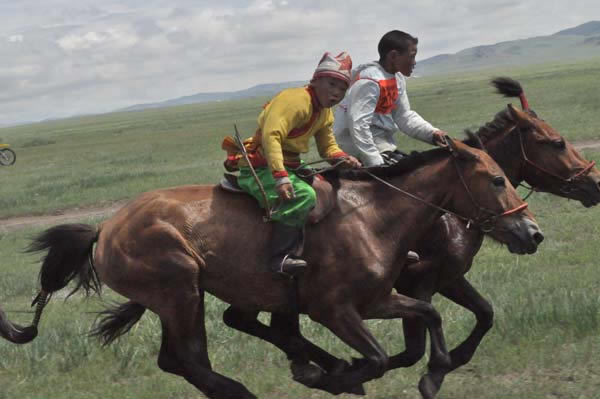 The Naadam Festival, or the ‘Three Games of Men’, has existed in one form or another for over 2000 years, and illustrates the Mongolians’ strong sense of pride in their country and heritage. Perhaps Ghengis Khan, the great and fearless Mongolian warrior, once competed here in these festivals during the thirteenth century, or as Gansukh, our guide, corrected me, ‘Chinggis Khan’. The festival consists of competitions in wrestling, horse racing, and archery, and represents the opportunity for the nomadic tribes people to gather together socially, and enjoy the thrill of competition.

The starting line for the horse race is also the finish line, and is simply a white chalk line on the grass. The young competitors walk or ride their horses to the starting line. Fathers and brothers help prepare the horses, grooming, adjusting saddles and talking strategy with the riders. The spectators lounge about in groups, socialising with friends they may not have seen for many months or perhaps the entire year. The expansive plains are home to these nomads, their lives are not constrained by the conveniences of modern civilisation.

As Bee and I taste our first ‘hoshut’, a Mongolian speciality made with beef rolled into flattened dough and then deep fried, we hear the first strains of a chant from one of the boys. Others join in this chorus as family and friends encircle their respective riders. This ritual is performed to bring luck and to honour the trainers. The style of dress of the riders varies wildly. There are girls in Mongolian silks with their long black hair in braids. Some boys sport silks as well, while others are dressed in well-worn clothes that have been passed down through the generations.

In the moments of anticipation and tension before the race commences, Amarjargal seems fearless as we strap the 3D camera harness around him. Amarjargal’s ‘horsecam’, a GoPro 3D Hero, will have to operate over a gruelling 30km horse race, so I check the camera, press record and we are rolling. I mount the Panasonic AG-3DA1 on my shoulder mount, and now both cameras are rolling.

A growing circle of riders and horses chant around the official race car that will speed along to monitor the race. Bee and I jump into our chase vehicle. I am hanging out of the front, and Bee will be snapping stills behind me. The horses are nervous and ready to run. With great difficulty, the riders hold them in check as they toe the starting line. The intense jostling at the starting line is unbearable, but suddenly the rope is dropped and the race is on.

With a burst of speed, my driver surges to get ahead of the pack so I can shoot this incredible thundering herd of horses as they spread across the horizon. Strapped into my seat while holding the camera with both hands, it is truly the wildest ride of my life. As we bounce along the rugged terrain, I try to be my own gyroscope to balance the camera.

I can hear the non-stop clicking from Bee’s Nikon. And as I watch the incredible race in my viewfinder, it is like living in a John Ford western. The wide-angle panorama of unbelievable blue sky and majestic mountains with hundreds of horses galloping across the plains is reminiscent of the exquisite Monument Valley setting of the typical John Ford/John Wayne Western epic. 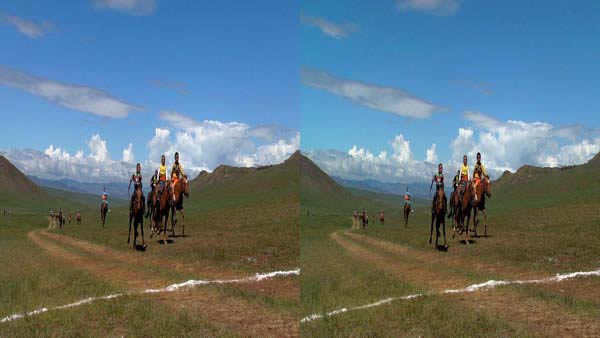 3D still of the race.

After a gruelling and torturous van ride, I see the huge crowd of people at the finish line-the van cannot get through and I will miss the climactic finish of the race – unless I jump out and sprint to the finish line before the winning horse arrives. The Mongolian crowd loves any race and I laugh as I realise that they are cheering for me. I make it to the finish line-set, roll, and capture the winner in 3D! 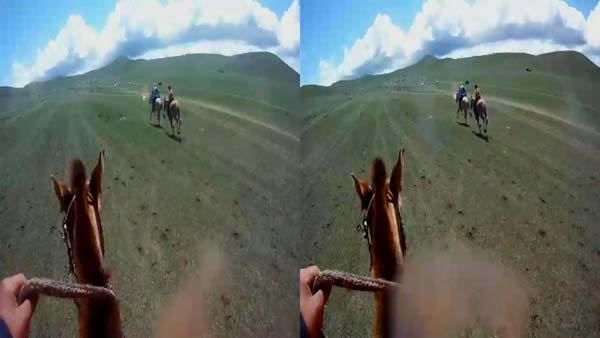 The view from the 3D horsecam.

Amarjargal comes in 10th and he too is a winner because not only has he photographed the first ever Naadam horse race in 3D using a unique 3D horsecam, as a ten year old Mongolian boy, he is also the youngest cameraman! 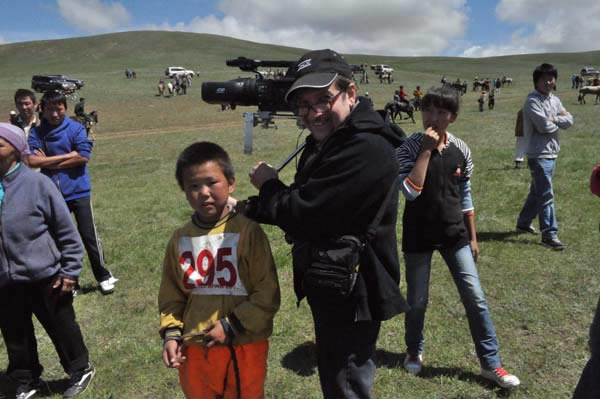 Amarjargal came tenth in the race, but was first as a Naadam Festival 3D cameraman on horseback.

We were on location for 7 days. The GoPro provided the only challenge. While the ‘cool’ factor was good, the quality of the camera is not really what is advertised or what I have seen in the test footage. Of course, shooting a ten-year-old riding bareback on a horse at full run is a lot to ask of the camera. While the format says .mp4, it is really .mov in an .mp4 wrapper which did not make for the smoothest playback, even though it was set for 720/60p. Ultimately, I had to transcode to real .mp4 and slow it down drastically in order to use it.

The Panasonic camera was a workhorse. It delivered every time with no problems. I have ‘lived’ with this camera for quite some time and I understand the capabilities. I did have reservations about the GoPro as mentioned. But, that said, it does fill a need for POV 3D.

As far as what could be improved, I would say better lensing on the GoPro and a more flexible codec. On the Panasonic, the idea for controlling the exposure and convergence with one control with a switch is the worst design flaw of the camera. No built-in ND filter is the next worst. I have recently added the Panasonic VZ Pro-PZFI-3D Varizoom Camera Remote and it gives all controls at your finger tips – an excellent product. I have also added a RedRock Micro Matte box and rails with an excellent ND filter. That has solved both problems. The last thing is that the native recording bandwidth on the Panasonic is too low. I have solved that by adding the Convergent Design, NanoFlash 3D. With it, I am shooting 180Mbps, .mxf XDCAM raw codec, 10-bit 4:2:2 sampling.

The whole project was edited using a special 3D-enhanced version of Grass Valley’s popular EDIUS editing platform, which I am currently beta-testing. Our team was equipped in the field with a Toshiba Qosmio i7 laptop and an LG Cinema 3D 24″ monitor with an AJA Hi5-3D HD-SDI to HDMI 1.4 converter box. This gave me an affordable lightweight field monitor to be able to check dallies and even do edits on location.

Where can the footage be seen?

I shot this film for a travel series called Explore 3D Travel, and I hope that it will be picked up by one or more of the 3D channels around the world. The trip was a marvellous experience on so many levels. The ability to push your creative and technical boundaries is certainly not for the faint-hearted, but the rewards are worth it when you can come back with footage like this.

Al Caudullo is Chief Cook and Bottle Washer, 3D Evangelist, Producer, 3D Stereographer and Editor for 3DGuy Productions. Al has won the Association of Virtual Worlds award for 3D Excellence, and has used his thirty plus years of video production experience as a foundation for stereoscopic image capture. As principal of 3DGuy Productions, Al served as 3D Stereographer and 3D Editor many on projects including film, TV and corporate production. Clients include Panasonic, Hitachi, Imagimax Studios, 3DeeCentral, Polaroid, Spatial View, Toyota and many others.