On September 3rd a team of dedicated – some may say unwise – cyclists set out to ride the 300 miles in 24 hours to the RAI in Amsterdam for the IBC Show, the premier event for broadcasters worldwide. After 18.5 hours in the saddle they made it, sore, very, very tired but elated to have been able to raise money for the Vision Charity, the TV industry charity that gives blind and visually impaired children a better chance to succeed in life.

While the riders were in the saddle for less than 19 hours, the inaugural nature of the event meant that a couple of logistical glitches saw the team arrive around three hours later than planned in Amsterdam. 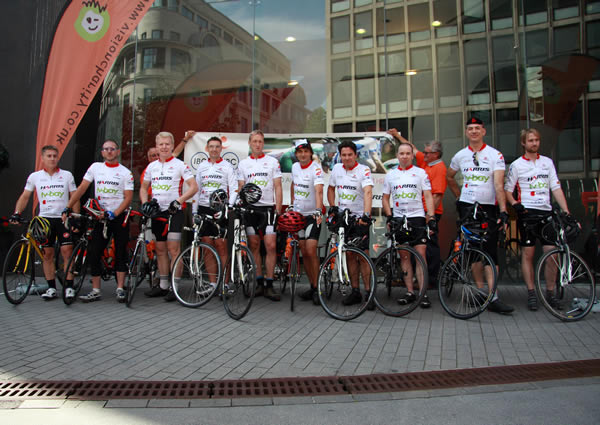 There was an additional ride that split the journey and taking part in that were: Jonathan Cooper – NEC Display Solutions, Clare Bell – ASP, Nick Pannaman – JCA TV.

This cycle-sportif was founded and has been led by Ciaran Doran of Harris Corporation, a seasoned veteran of long distance cycling. He says, “Everyone involved has done a marvellous job. This was a huge physical and psychological challenge but all of us are very, very happy to have been able to contribute to the Vision Charity in this way: without that overall aim to keep us going through the colder, wetter moments we may have crumbled. I’d like to also thank all the companies that gave us their time and technology for free as well as the whole support team without whom this wouldn’t have been possible. With thanks to: LiveU, Garland Partners, MediaFreedom, ProBand, Media Kinnon Productions and Exposure.”

Over 1.5 hours of the ride was streamed live courtesy of a LiveU LU60 cellular uplink backpack unit – supplied by UK distributor Garland Parners – that used 3G connectivity to stream the images to the website. Media Freedom and ProBand’s technology and expertise was also vital in making this happen, while Media Kinnon’s editing skills will pull the highlights together for later viewing.

Donations can still be made and are very welcome. Please donate online through the team JustGiving page: www.justgiving.com/IBC2IBC-Team-– or text vibc11 and the amount you want to donate (up to £10) to 70070. Every penny goes to Vision Charity in support of the IBC2IBC ride.