I was a bit of a 3D sceptic to start with, just quietly observing developments, but when I saw the first prototypes of the Panasonic AG-3DA1 camera, I was impressed that they had managed to distil the complexities down to such an easy-to-operate camera.

My production company, based in Sydney, has been tackling projects from the Olympics to underwater documentaries on sharks. Having seen the Panasonic camera I was inspired enough to set myself a real challenge: to shoot Australia’s first 3D wedding video, which is now believed to be one of the world’s first multicam 3D wedding shoots.

Panasonic lent us the only two AG-3DA1 cameras in the country so that I and my crew could shoot in the same two-camera coverage style as I would for a 2D wedding. This was important as I wanted to produce a quality piece that did not just rely on the novelty of 3D. 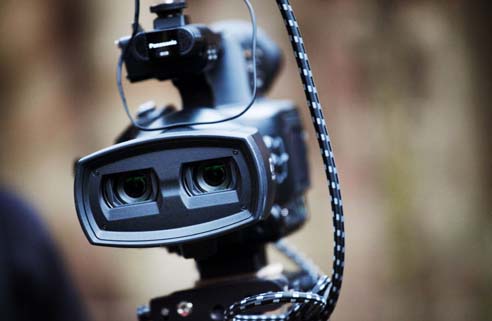 We decided to make a splash with this project, so once we had announced the idea of shooting a wedding video in 3D, we had another crew watching us for a ‘making of’ video, which generated a great deal of media interest. We also scheduled a premiere for the video, to which the media were invited.

The biggest change to our usual way of shooting was definitely the minimum distance required to obtain an acceptable image. Anything closer than two meters did not work as it would cause the 3D viewers’ eyes to converge unnaturally and become cross-eyed. The other issue was ‘window violations.’ This is when an object appears in front of the screen but is cut off by the edge of the image, and it can actually cause physical pain to the viewers’ eyes. Normally, we would often compose shots using shoulders on the edge of a frame, but we had to make sure that this did not happen in 3D. For weddings and other live events where you are very limited in your control of people, this can be very difficult.

We controlled convergence and focus manually during the shoot, which was a particular challenge on Steadicam shots, but my colleague, Edgard Neves, nailed several good shots to make sure that we had enough variety to the 3D depth.

Shot lifespan was the other big challenge we needed to tackle. To appreciate the 3D image fully, the viewer needs a little more screen time per shot. Because of the image’s depth, each shot appears to have more to look at – it is almost like having multiple shots at the same time – and you need to let the audience take the time to explore each one.

We were on a deadline which only gave the post crew a couple of days to produce an edit to screen at the premiere. What made this possible was sticking with our current 2D editing platform, the Grass Valley EDIUS. We were completely familiar and comfortable with the way EDIUS works, and it has good support for 3D.

EDIUS currently uses a simple technique to preview 3D using a split-screen effect. It takes the two stereo streams and squeezes them horizontally – the same frame-compatible mode that broadcasters are using to transmit 3D in conventional HD channel bandwidth.

We borrowed a 50″ Panasonic Viera display from a local dealer for monitoring the edit. The squeezed output from EDIUS went to a Grass Valley HDSPARK card to provide HDMI output, which the monitor then displayed as full 3D, so we could see the full 3D effect of what we were doing.

We chose not to use any dissolves or other effects in the edit because our style in projects like this is to keep things very clean.

The pressure was on me and my team because of the news interest around the production, but we completed the edit in a couple of days without any problems.

Great 3D production is all about subtlety: un-stimulating compositions can be given a new breath of life with 3D perspective, and good 3D should just enhance the telling of the story, not become the story itself.

Only time will tell how much 3D will be taken up in mainstream productions, but the overall response to this project has been very positive. The results have been pretty spectacular, and I am now convinced that this is certainly a creative option that many will want to use as a thrilling new way of seeing the world.

Abraham Joffe is a cinematographer and owner of Untitled Film Works, a production company based in Sydney, Australia, that specialises in weddings and events.